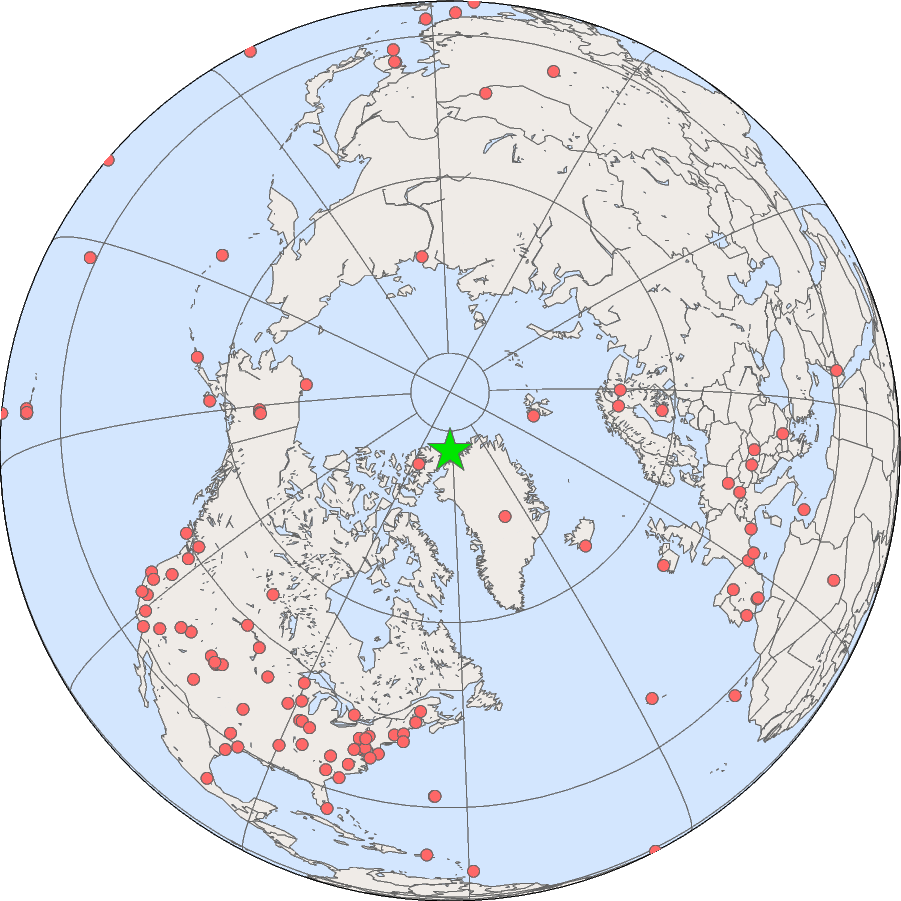 Alert is the most northerly site in the World MeteorologicalOrganization (WMO) Global Atmosphere Watch (GAW) Network. Itis located on the northeastern tip of Ellesmere Island in Nunavut,far removed from the major industrial regions of the NorthernHemisphere.

Alert is also the site of a military station (CFS Alert)staffed with around 60 personnel, and a MSC Upper Air Weather Station. The air chemistry observatory is located on a plateau about 6 km SSW of the main camp. The plateau rises abruptly to an elevation of about200 m (with local hills rising to 500 m). The plateau forms thenorthern edge of the Hazen Plateau, which continues to rise tothe south, reaching a typical elevation of 1000 m and extendingthrough the central part of northern Ellesmere Island. Thesoutheastern edge of the Hazen Plateau is defined by the 7500km2 Agassiz Ice Cap, a permanent feature with a central elevationgreater than 2000 m.

Southwest of Alert is the rugged UnitedStates range, with peaks exceeding 2500 m. The Greenland coastis 60 km east of Alert. The terrain in the immediate area of Alertis steeply rolling, on the order of 100-150 m above sea level, withfrequent deep ravines and high cliffs. The land is covered withsnow for almost ten months of the year. During the summer, theland is covered with a sparse covering of polar desert vegetation.Alert experiences 106 days of full darkness (October 30th toFebruary 13th), 153 days of 24-hour daylight (April 7th toSeptember 7th), and two 53-day transition periods with some diurnalcycle going from virtually total daylight to total darkness (andvice-versa).

The annual mean air temperature at the Observatory is -18°C and the monthly mean air temperature increases to 3°C in August and decreases to below -30°C from December to the end of March. The annual mean value of the wind velocity is 3.5 m s-1. The prevailing winds are SSE to WWS due to channelling by the mountainous regions of northern Ellesmere Island and Greenland. A more detailed meterological summary can be found in Hopper and Hart [1994].