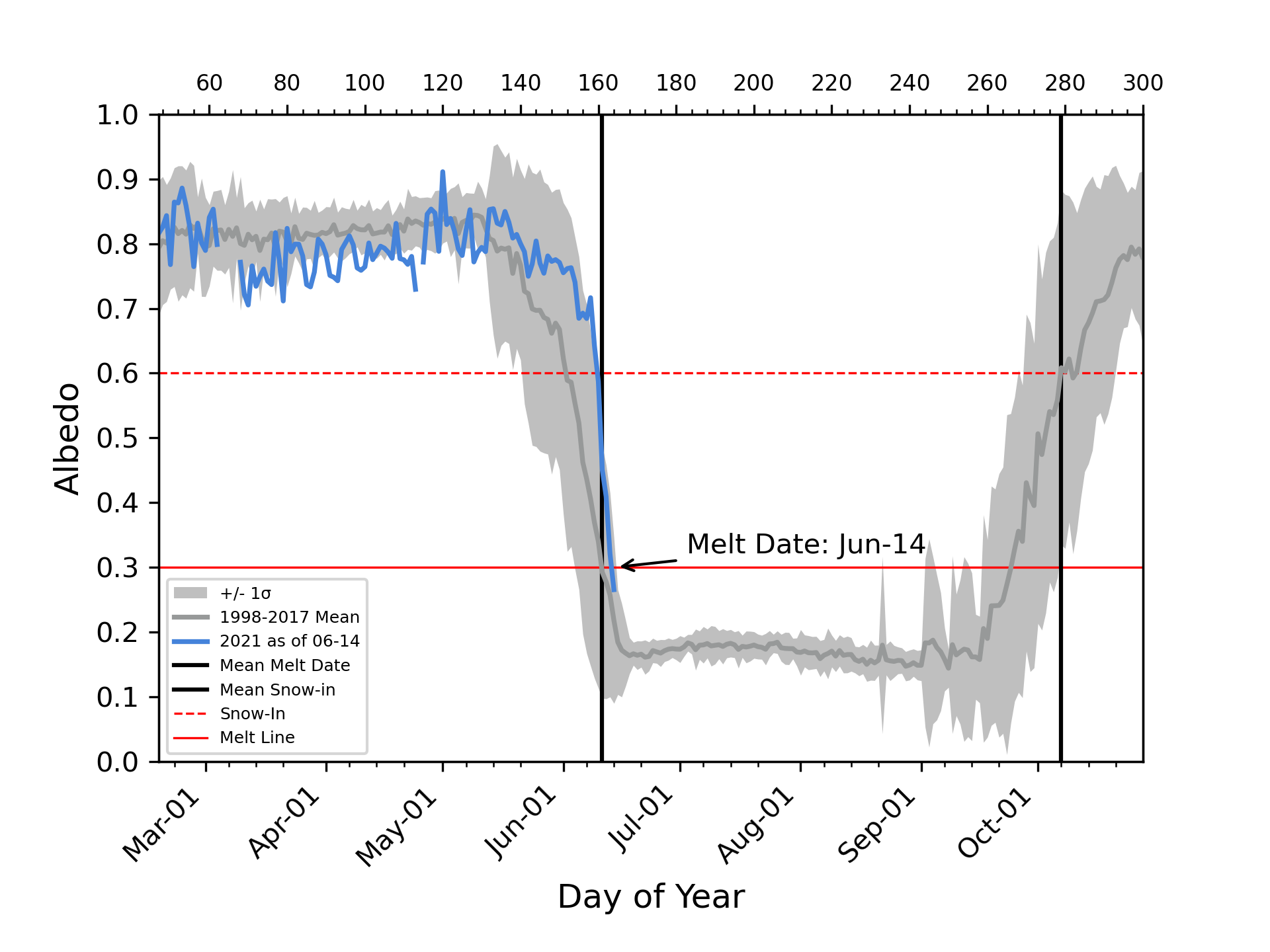 The daily mean surface albedo of 2021 (blue line). 1998-2017 mean is shown as the solid gray line with ± one standard deviation of the mean represented by the shaded area. This has been limited through 2017 because data from 2018 and 2019 have yet to be quality controlled. The day of snowmelt is determined when the measured daily mean surface albedo drops below 0.3 (represented in the solid red line). The Snow-in date (represented by the dotted red line) is determined when the albedo ratio rises above 0.6 or when snow depth persists above 2.54cm (> 1 inch). Photo Credit: Logan Soldo|Global Monitoring Laboratory from https://gml.noaa.gov/grad/snomelt.html

On June 14, 2021, the daily mean surface albedo at Global Monitoring Laboratory (GML) Barrow Atmospheric Baseline Observatory dropped below 0.3, indicating the start of the snow-free season. The snowmelt day ranked 6th latest of the latest 24 years and 44th latest since 1926.

Since the mid-1980s, Barrow Observatory has been monitoring for the snowmelt day, with the National Weather Service providing data since 1921 and a few observations from cooperative programs dating back to 1902.

The daily mean surface albedo measures the average proportion of the incident radiation that is reflected by a surface. While fresh snow has a high albedo (0.8-0.9), the tundra beneath has a very low albedo (0.15-0.25). Longer periods of low albedo in the Arctic indicate a longer snow-free season, which traps more heat at the surface.

It is not yet clear what the later snowmelt this year implies. Data will need to be analyzed in the context of the long-term record to sort out the variability and investigate the causes of the snowmelt.

GML’s long-term effort in measuring surface albedo makes it possible to track snow-free seasons in the Arctic. Radiometric measurements are taken from a 10-m tall tower at Barrow Observatory, below cloud layers, and thus avoiding the challenges of distinguishing clouds from snow experienced by satellites.

The new development at Barrow Observatory will expand the ways to validate the snow cover situation derived from the daily mean surface albedo, improving the reliability of this dataset. A new live camera was installed to provide images every day. These live photos provide information about the spatial context of the snow cover, validating the surface albedo data which only assesses the snow cover situation at one location. The camera will also be used to validate the albedo assessment of snow cover by focusing on snow depth measurement sticks.

A photo of the Albedo Rack taken from the meteorology tower located to the east of the Barrow Observatory building on June 15, 2021. Photo Credit: Global Monitoring Laboratory from https://gml.noaa.gov/obop/brw/livecamera.html

The long-term record at Barrow helps scientists understand the causes and impacts of climate change in the Arctic. As thawing permafrost releases methane and other greenhouse gases into the atmosphere and melting sea ice clears out shipping routes in the Arctic Ocean, these data gaining increasing importance in answering questions that scientists and policymakers have regarding our future climate.