What is the ozone layer?

High up in the atmosphere, in a region called the stratosphere between 19 and 30 km above the Earth's surface, ozone is constantly being produced and destroyed naturally. This ozone layer filters out ultra-violet (UV) rays from the Sun and protects life on Earth. Usually there is a fine balance between the build up and loss of ozone. However, any decrease in the amount of ozone in the ozone layer will increase the amount of UV radiation reaching the Earth's surface, and worsen the impacts due to UV exposure. UV rays from the Sun can be very damaging to many things on Earth. For example, prolonged exposure to the Sun's UV radiation causes sunburn, which over many years can develop into skin cancer. UV rays can also damage eyesight. UV rays are also harmful to other forms of wildlife, particularly small plants and animals living in the sea called plankton. Plankton is not protected from the Sun's rays, which can penetrate water to a depth of many meters. Plankton forms the base of the ocean food chain. UV rays can damage certain crops, like rice, which many people in the world rely on for food. Finally, UV rays can damage paint, clothing and other materials.

Does ozone layer depletion have anything to do with global warming and climate change?

The human health and environmental concerns about ozone layer depletion are different from the risks we face from global warming. Nevertheless, the two phenomena are related in certain ways. Some pollutants contribute to both problems and both alter the global atmosphere. Ozone layer depletion allows more harmful ultraviolet (UV) radiation to reach our planet's surface. While increased UV radiation is not the cause of global warming, it can lead to skin cancers, cataracts and a suppressed immune system in humans, as well as reduced yields for crops. Ozone layer depletion is mainly caused by chlorofluorocarbons or CFCs. CFCs are therefore no longer produced in industrialized countries, and will eventually be eliminated worldwide. But like CO2, CFCs are also a strong greenhouse gas. CFCs can remain in the atmosphere for as long as a century, meaning that their contribution to both ozone layer depletion and climate change will persist for a long time.

In the 1970s it was discovered that man-made chemicals called chlorofluorocarbons (CFCs) were destroying the ozone in the ozone layer. CFCs contain chlorine which may be released under certain stratosperhic conditions and react with ozone. Once the chlorine has broken up one ozone molecule, it is freed to repeat the process again and again, up to 100,000 times. Thankfully, the use of CFCs has been banned since 1996. However, because CFCs remain in the air for a long time, they will continue to affect the ozone layer well into the 21st century. 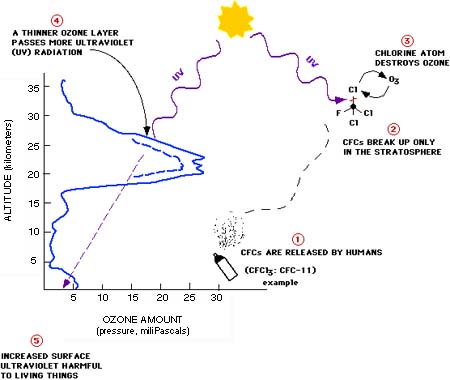 What is the South Pole "ozone hole"?

Scientists believed that ozone levels were quite stable until the late 1970s. Since then, a general decline in ozone levels has been seen. This ozone loss is believed to be related, in part, to increases in chlorine and bromine in the stratosphere from human-produced chemicals. However, every year during September and October (the Southern Hemisphere spring), ozone loss is much greater over Antarctica, where an ozone hole forms.

The hole forms because the stratosphere above Antarctica becomes very cold in winter and is cut off from the rest of the world by a natural circulation of wind called the Polar Vortex. This prevents mixing in the atmosphere and so any ozone depletion is concentrated here. In addition, the very cold temperatures in the air cause clouds in the stratosphere which speed up ozone depletion by chlorine and bromine. In summer (December and January), the ozone hole repairs itself when new ozone comes from lower latitudes, but forms again the following spring. 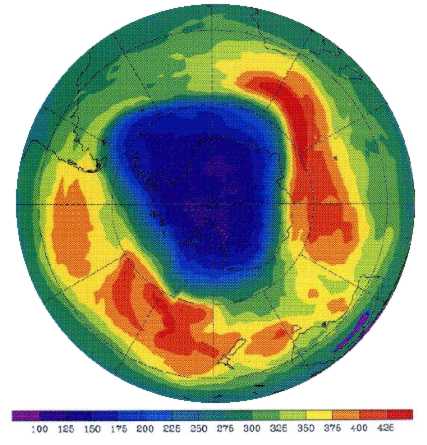 Courtsey of the NASA TOMS Program

How does amount of ozone in the atmosphere effect UV radiation?

Changes in ozone concentration in the atmosphere affect ultra violet (UV) radiation. The UV portion of the solar spectrum is generally divided into three regions: 1) UV-A (315-400 nm); 2) UV-B (280-315 nm); and 3) UV-C (< 280 nm). The UV-A is essentially unaffected by ozone absorption; the UV-B is strongly affected by variations in ozone; and the UV-C is almost entirely absorbed before it reaches the surface. Even a small increase in the amount of UV-B radiation can cause an increase in health problems such as skin cancer.
At the earth's surface, the incoming solar radiation depends on the absorption and scattering of the atmosphere, the earth-sun distance, and the irradiance of the sun. The atmospheric transmission in the UV portion of the spectrum is controlled primarily by Rayleigh scattering by air molecules, scattering by clouds, and absorption by ozone. Aerosol particle scattering and absorption can also play a significant role. Solar UV irradiance arriving at the earth's surface is controlled by both natural and anthropogenic effects in both the stratosphere and the troposphere.

GMD Groups studying the effects of ozone on UV radiation:

What role does GMD play in ozone monitoring?

The Earth System Research Laboratory's (ESRL) Global Monitoring Laboratory (GMD), part of NOAA's Office of Oceanic and Atmospheric Research (OAR), traces its roots in ozone monitoring back to the U.S. Weather Bureau and its measurements of total column ozone as part of the International Geophysical Year (IGY), 1957. W.D. Komhyr established the U.S. Dobson network in its current form with well-characterized and calibrated instruments and standardized operating procedures in the early 1960s.

The NOAA/ESRL/GMD Cooperative Dobson network of 16 stations (including five sites within the continental U.S., one in Hawaii, and another at the South Pole with data records of nearly forty years in length) observes the total atmospheric ozone column using ground-based Dobson spectrophotometers. The instruments are regularly calibrated against World Standard Dobson No. 83 maintained by GMD and provide a very stable observational record well suited for determining long-term changes in ozone. The World Standard is calibrated annually at Mauna Loa Observatory. Data from Dobson No. 83 at Mauna Loa are also used for validating satellite column ozone measurements.

A network of eight ozonesonde sites makes weekly ozone vertical profile observations from the surface to about 35 km using electrochemical concentration cell (ECC) ozonesondes. Three of these sites, Boulder, Colorado; Hilo, Hawaii; and South Pole, Antarctica have records of at least 15 years in length covering a significant portion of the period that stratospheric ozone has been declining. The unique record from the South Pole Station shows the annual development of the springtime Antarctic "ozone hole" along with deepening of the "ozone hole" over the past two decades. Because of the sensitivity of the Antarctic stratosphere ozone layer to depletion from human-produced chlorine and bromine compounds, the ozone profile measurements should provide sensitive indicators of ozone recovery as the ozone destroying compounds decrease.

Along with the total column and profile measurements of ozone, measurements of the human produced chlorine and bromine compounds responsible for ozone depletion have been made by GMD since 1977. Weekly flask grab samples and continuous in situ analyzer data from eight stations, ranging from the high Arctic to the South Pole, provide information on the gases that are the source of chlorine and bromine in the stratosphere. These data show that effective equivalent chlorine (this accounts for bromine as well as chlorine) peaked in the lower atmosphere in 1994 and has since begun to slowly decline.