Volcanic eruptions play a major role in the sulfur loading of the stratosphere, ejecting large amounts of sulfur dioxide high into the atmosphere where it is oxidized to form sulfuric acid and eventually sulfate aerosol. This aerosol layer extends from the tropopause to about 35 km altitude and is global in nature. Because of the sporadic nature of volcanic events, the amounts and corresponding optical properties of aerosol are highly variable.

Scientists at G-Rad have constructed a long-term aerosol climatology providing information on the behavior and radiative properties of stratospheric aerosol as a function of latitude, altitude, and time. The data used include lidar measurements from the 1970s to present, pyrheliometer observations dating from the 1950s, and satellite observations from the Stratospheric Gas and Aerosol Experiment (SAGE II) on NASA's web site, from 1984 to present. 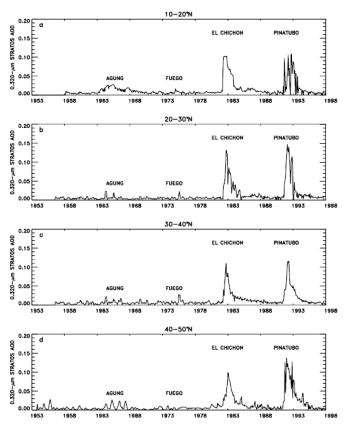 The list of volcanic eruptions occurring during the timeframe of analysis is:

As part of an ongoing effort to understand aerosol and other effects on vertical ozone profile measurements, we have constructed a database of 1,300 individual ozone profiles. These profiles were constructed by combining daily ozonesonde data taken at Hohenpeissenberg, Switzerland, during 1998-1999 with SAGE II satellite data taken near the station over the same time period. Using a state-of-the-art radiative transfer code, we then calculated what a ground-based instrument would measure as a function of solar zenith angle (SZA). Our analysis of the data revealed several interesting properties of the ultraviolet zenith-sky radiance (ZSR). We find that, at wavelengths longer than 310 nm, and at SZA less than 70°, the ZSR is sensitive only to total ozone column and has virtually no sensitivity to the ozone profile. At around 75° SZA, the ZSR contains useful information about tropospheric ozone column.

In terms of aerosol, the results indicated that the ZSR, which is usually enhanced by aerosol scattering, is also strongly influenced by aerosol absorption. Aerosols not only absorb directly: they also absorb the Rayleigh-scattered radiation passing through them, enhancing the effect. In principle, by monitoring the behavior of the ZSR with SZA, it should be possible to measure both the aerosol optical depth and single scattering albedo. At high SZA, stratospheric and tropospheric aerosols produce different effects on the ZSR, so these measurements can be used to estimate the stratospheric aerosol optical depth. This stratospheric aerosol information is needed to correct the Umkehr ozone retrievals. Correct Umkehr profile retrievals

Taking advantage of these properties of the ZSR requires measurements at several individual UV wavelengths in and out of the ozone absorption band (310-360 nm). This requirement eliminates using the popular Dobson spectrophotometer for such studies. There is, however, a global network of Brewer instruments that can be used for the studies we propose here. We will continue our research to study how these instruments could be used to develop new techniques to remotely sense aerosols and ozone from the ground.