(b) The time series of model residuals--the difference between the simulated and measured mole fractions--shown with dark green filled circles. These residuals should be uncorrelated in time, unbiased (i.e., have a mean of zero), and distributed normally. 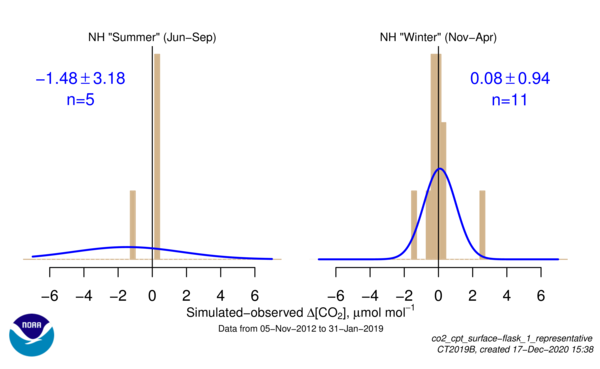 (d) Seasonal histograms of the residuals for this dataset. See caption for top figure for the definition of residuals. The left panel collects all residuals for each northern hemisphere summer (June through September); the right panel is the northern hemisphere winter (November through April). Residuals before 1 Jan 2001 are excluded from this analysis to avoid an effect of CarbonTracker burn-in from a poorly-known initial CO2 distribution. The tan color shows the histogram of the residuals themselves; the blue lines and statistics shown in blue text are a summary of the residuals interpreted as a normal distribution. The vertical scales are relative, determined by the number of observations and how tightly they are grouped, with the area under the histogram forced to unity.