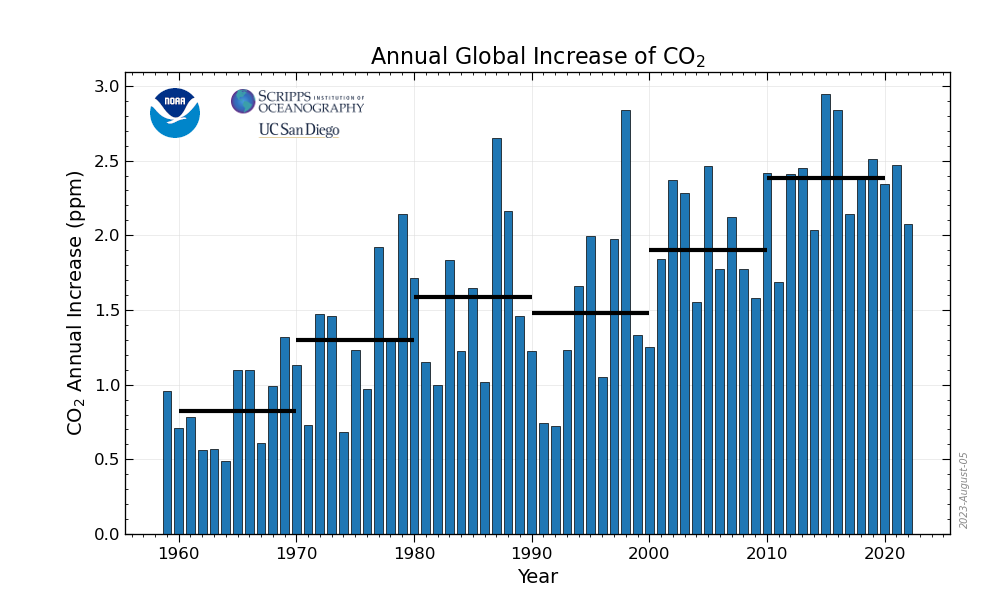 The table and graph show annual mean carbon dioxide growth rates based on globally averaged marine surface data. In the graph, decadal averages of the growth rate are also plotted, as horizontal lines for 1960 through 1969, 1970 through 1979, and so on.

The annual mean rate of growth of CO2 in a given year is the difference in concentration between the end of December and the start of January of that year. It represents the sum of all CO2 added to, and removed from, the atmosphere during the year by human activities and by natural processes. The annual mean growth during the previous year is determined by taking the average of the most recent December and January months, corrected for the average seasonal cycle, as the trend value for January 1, and then subtracting the same December-January average measured one year earlier. Our first estimate for the annual growth rate of the previous year is produced in February of the following year, using data through November of the previous year. That estimate will then be updated in March using data though December, and again in April using data through January. We finalize our estimate for the growth rate of the previous year in the fall of the following year because a few of the air samples on which the global estimate is based are received late in the following year.

The values in this table are subject to change depending on quality control checks of the measured data, but any revisions are expected to be small. The estimates of the global mean CO2 concentration, and thus the annual growth rate, are updated every month as new data come in. The statistics are as follows. If we estimate during a given month ("m") the global average CO2 during the previous month ("m-1"), the result differs from the estimate made (up to almost a year later) when all the data are in, with a standard deviation of 0.57 ppm. For month m-2, the standard deviation is 0.17 ppm, and for month m-3 it is 0.10 ppm. We decided to provide the global mean estimates with a lag of two months. Thus, a December average is first calculated during the following February.

The estimated uncertainty in the global annual mean growth rate (given as 68% confidence interval) varies by year, and has been estimated with a non-parametric statistical technique for 1980 and later. To estimate the uncertainty associated with our network, a bootstrap method was used where one hundred different realizations of a global network were constructed by randomly picking sites, with restitution, from our existing marine boundary layer sites in the NOAA/GML cooperative air sampling network (Conway, 1994). Each member of the ensemble of networks has the same number of sites as the real network, but some sites are missing, while others are represented more than once. An additional condition is that at least one southern high latitude site is present, one tropical and one northern high latitude site, because we have always maintained broad latitude coverage in the real network. Temporal data gaps at individual sites are present in the bootstrap networks. Starting in September, 2018, we added an additional analytical uncertainty term calculated with a Monte Carlo method. A randomly selected measurement error is added to each obervation. We assume no overall bias, but the magnitude of this term varies over time with improved analyzer precision and ability to propagate the XCO2 standard scale. The reported uncertainties are calculated by taking network and analytical terms in quadrature and reporting them as the 1-sigma standard deviations (i.e., 68% c.i.) for each year's average growth rate. Pre-1980 the annual growth rate and uncertainty have been calculated from the average of the Mauna Loa and South Pole records (before 1974 as measured by the Scripps Institution of Oceanography), as detailed in Ballantyne et al. (2012).