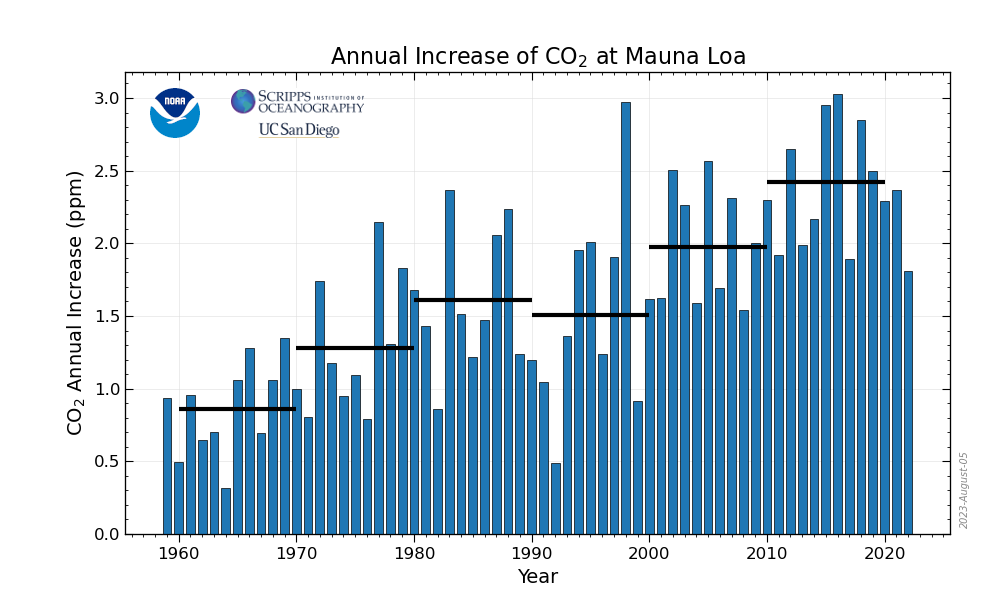 The table and the graph show annual mean carbon dioxide growth rates for Mauna Loa. In the graph, decadal averages of the growth rate are also plotted, as horizontal lines for 1960 through 1969, 1970 through 1979, and so on.

The annual mean rate of growth of CO2 in a given year is the difference in concentration between the end of December and the start of January of that year. If used as an average for the globe, it would represent the sum of all CO2 added to, and removed from, the atmosphere during the year by human activities and by natural processes. There is a small amount of month-to-month variability in the CO2 concentration that may be caused by anomalies of the winds or weather systems arriving at Mauna Loa. This variability would not be representative of the underlying trend for the northern hemisphere which Mauna Loa is intended to represent. Therefore, we finalize our estimate for the annual mean growth rate of the previous year in March, by using the average of the most recent November-February months, corrected for the average seasonal cycle, as the trend value for January 1. Our estimate for the annual mean growth rate (based on the Mauna Loa data) is obtained by subtracting the same four-month average centered on the previous January 1.

The estimated uncertainty in the Mauna Loa annual mean growth rate is 0.11 ppm/yr. This estimate is based on the standard deviation of the differences between monthly mean values measured independently by the Scripps Institution of Oceanography and by NOAA/GML. The annual growth rate measured at Mauna is not the same as the global growth rate, but it is quite similar. One standard deviation of the annual differences MLO minus global is 0.26 ppm/year.