Flask data used to derive U.S. CCl4 emissions in the study by Hu et al., 2016 can be found at the GML ftp site.

Combined Data Set - The GML Halocarbons and other Atmospheric Trace Species (HATS) group has been measuring carbon tetrachloride (CCl4) with three separate programs since 1987. The programs include one flask system using gas chromatography with electron capture detector (ECD) and two in situ ECD measurement programs. Flask measurements started in 1995 with six stations and continue today sampling at 15 locations (13 background air). In situ measurements of CCl4 were started in 1987 with the RITS instruments and later replaced in 1998 by the CATS gas chromatographs that are currently installed at six remote field sites and make hourly measurements.

Carbon tetrachloride and methyl chloroform loss during storage in stainless-steel canisters arise most commonly at high-latitude or high-altitude sites where the sample air is dry (i.e., ALT, BRW, MLO, NWR, and SPO - especially in winter). Extra efforts have been made to flag samples suspected of suffering from this known artifact, thereby barring them from inclusion in monthly mean estimates. The user is cautioned, however, that small biases to the low side may nevertheless remain in the OTTO flask data.

The HATS flask GC-MSD program also measurses CCl4, however this data has not yet been incorporated into the combined data set. GC-MSD flask data for CCl4 used in Hu et al., 2016 can be found on the GML FTP site.

Current HATS programs (green rectangles) and discontinued programs (orange rectangles) are used in the combined data set. Click on a rectangle for a link to a specific program's data files. 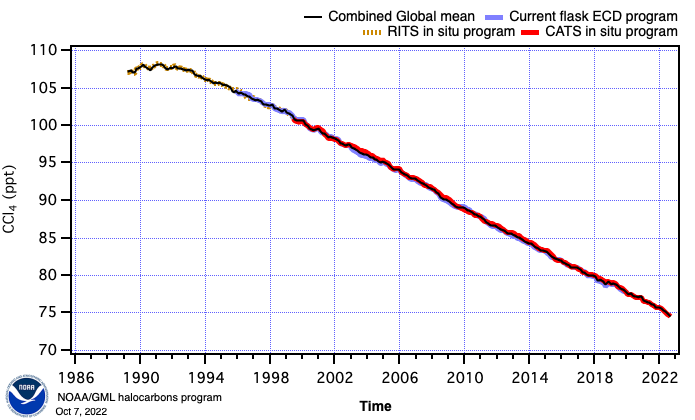 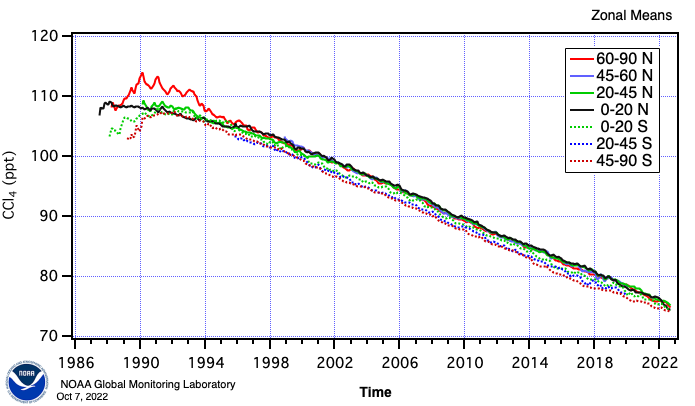 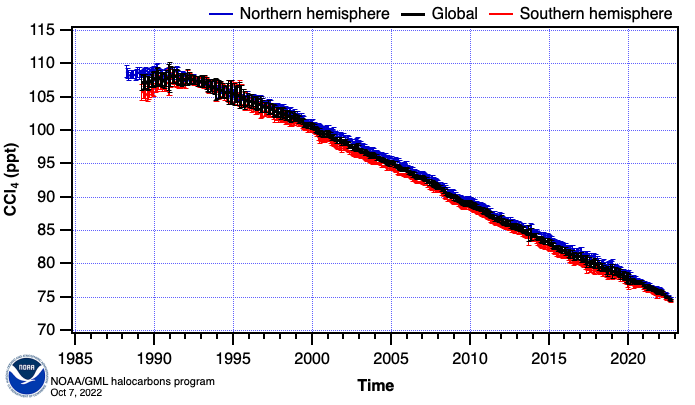 Hemispheric and a global mean are calculated from the zonal averages where sampling locations are weighted by the cosine of their latitude. Measurements during the 1980s to early 1990s from the RITS program were less precise than the current measurement programs (OTTO and CATS) and appear to have a bias in the Southern hemisphere. This combined CCl4 data set is used in NOAA's Annual Greenhouse Gas Index (AGGI) and NOAA's Ozone Depleting Gas Index (ODGI). 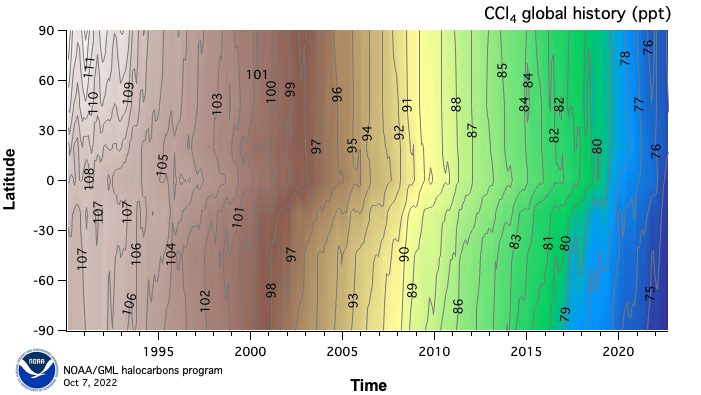 Global history of CCl4 as function of a latitude (y-axis) and time (x-axis).