New in 2022: Continental U.S. emissions for CFC-113 are located on the US Potent GHG Tracker website.

The GML Halocarbons and other Atmospheric Trace Species (HATS) group have been measuring chlorofluorocarbon-113 (CFC-113) with three separate programs since 1992. The programs include two flask systems using gas chromatography with either electron capture detector (ECD) or mass spectrometry detection (MSD) and one in situ ECD measurement program. Flask measurements started in 1977 with six locations and another nine added over the years. Currently, the flask program samples at 15 sites about once a week. In situ measurements of CFC-113 were started in 1998 with the CATS gas chromatographs that are currently installed at six remote field sites and make hourly measurements.

A combined data set has been developed to incorporate all of the HATS monthly mean measurements made by each program. The combined data set is calculated by taking weighted averages of co-located measurements from background NOAA/GML air measurement programs (listed below). All programs are on the same NOAA scale (NOAA 2002 scale for CFC-113), and every attempt is made to correct known biases between measurement programs; however, there may be small differences that are not understood and characterized.

When comparing measurements from station to station, be aware that not all locations are composed of the same measurement programs. The hemispheric and global means in the combined data set are our best measure of long-term trends and are used for international and national assessments for background air measurements. Displayed below are the data sets used to produce the combined data set as well as several figures.

There is a systematic difference between MSD and ECD measurements (both flask and in situ programs), where the ECD data is on average 1.5 ppt greater. Results from ECD instruments (OTTO and CATS) are adjusted for the combined dataset presented here. Follow the individual measurement program links at the bottom of this page for unadjusted data.

Current HATS programs (green rectangles) and discontinued programs (orange rectangles) are used in the combined data set. Click on a rectangle for a link to a specific program's data files. 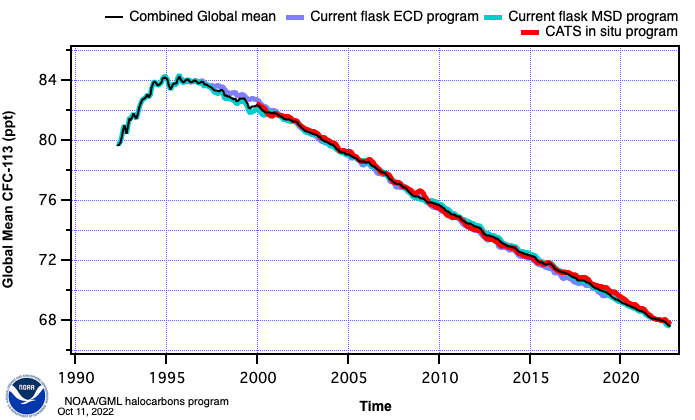 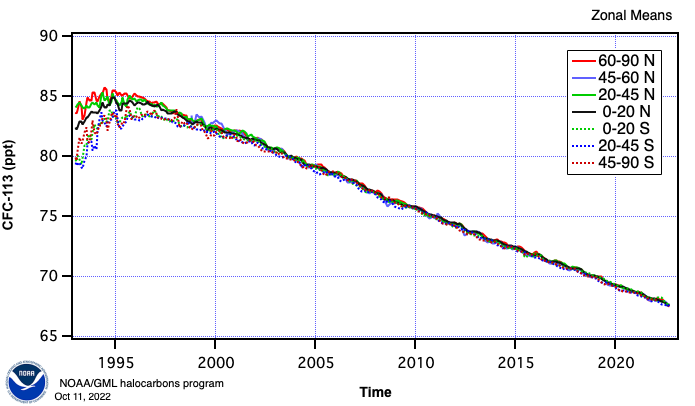 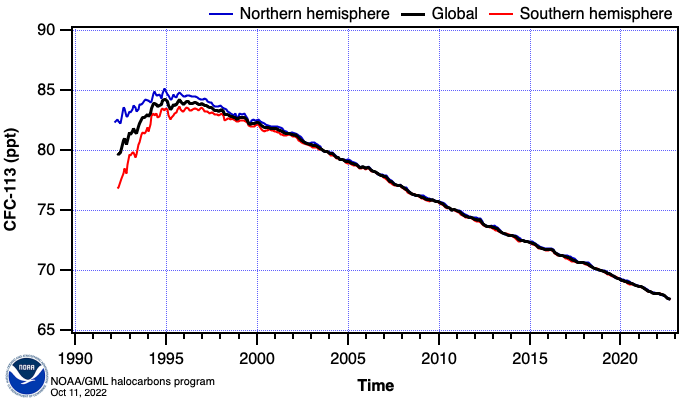 Hemispheric and a global mean are calculated from the zonal averages where sampling locations are weighted by the cosine of their latitude. This combined CFC-113 data set is used in NOAA's Annual Greenhouse Gas Index (AGGI) and NOAA's Ozone Depleting Gas Index (ODGI). 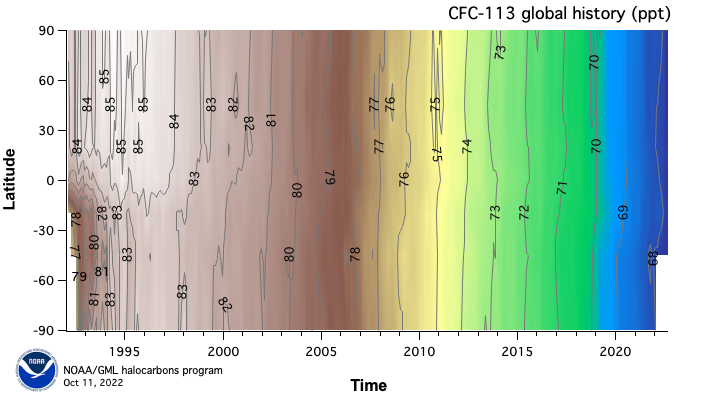 Global history of CFC-113 as function of a latitude (y-axis) and time (x-axis).