Since 1977 four different sampling programs in The Halocarbons and other Atmospheric Trace Species (HATS) group and one flask program in the Carbon Cycle Greenhouse Gases (CCGG) group have measured N2O. The programs include three flask and two in situ systems. Flask measurements started in 1977 with five stations and continue sampling at more than a dozen remote locations. The combined N2O dataset uses 13 background air sampling locations.

The Radiatively Important Trace Species (RITS) in situ program started in 1986 with a couple of gas chromatographs located at Mauna Loa, Hawaii and South Pole observatories. Over the following few years, instruments were added at Barrow, Alaska, American Samoa, and Niwot Ridge, Colorado. A four channel gas chromatograph called the Chromatograph for Atmospheric Trace Species (CATS) was developed in 1998 and replaced the RITS in situ instrumentation. The CATS gas chromatographs are currently deployed at six field sites and make hourly measurements. The table below summarizes the different NOAA/GML long-term N2O measurement programs.

Prior to 2009 there is a systematic difference between the OTTO and CATS programs at co-located measurement sites. The HATS/OTTO flask data have been adjusted by the mean difference for the combined GML dataset presented here. The adjustment is +1.3 parts-per-billion (ppb) at American Samoa and +0.6 ppb elsewhere. 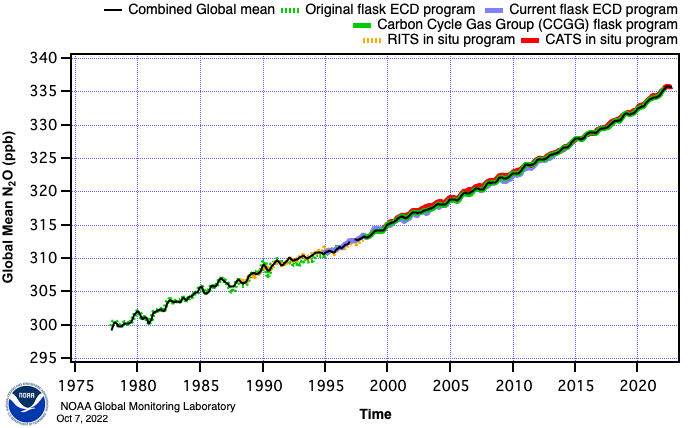 The figure above shows the different measurement programs' calculated global means and illustrates the overlap amongst programs (current programs are solid lines, dashed lines are discontinued programs). Measured monthly means from the different programs are statistically combined to create a long-term NOAA/GML dataset (black line). The combined data is calculated by first interpolating missing data at a sampling location for each measurement program. A weighted average is subsequently taken where there are co-located measurements from two or more programs; followed by a three month wide box smooth algorithm. 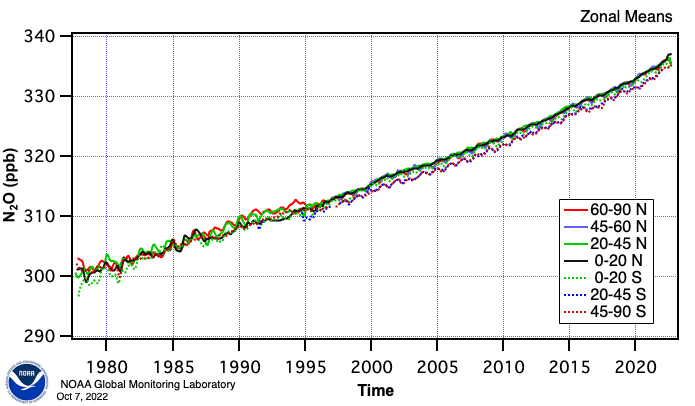 Zonal, hemispheric, and global means are calculated for four northern (solid lines) and three southern (dashed lines) bins where sampling locations are weighted by the cosine of their latitude. 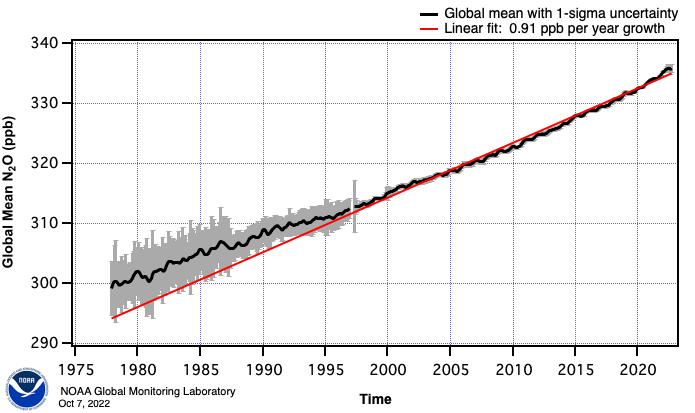 The 1-σ error displayed above (gray error bars) illustrates poorer instrumental precisions in the 1970s and 80s. The old flask instrument running from 1977 to 1995 had to be corrected for water (a volume correction) and the amount of carbon dioxide in the sample, because samples were run without a drier and the chromatography was subject to a CO2 artifact. Improvements in measurement techniques and technology (such as switching to Argon/Methane carrier gas), as well as more sampling locations have reduced the global mean uncertainty since the mid 1990s. The red line is a linear fit to the global mean data demonstrating a fairly constant annual growth rate greater than 0.75 ppb per year. 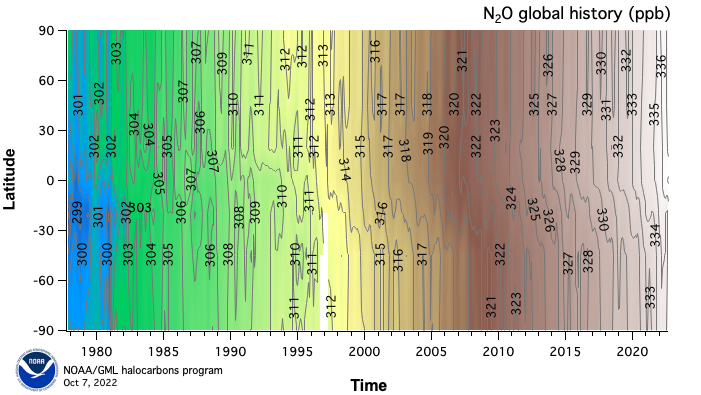 Global history of nitrous oxide as a function of latitude (y-axis) and time (x-axis). 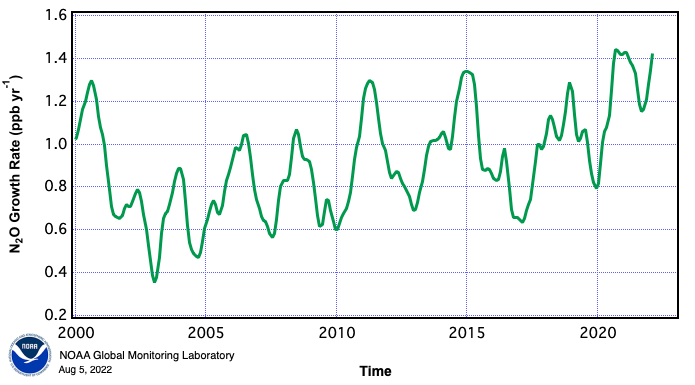