New in 2022: Continental U.S. emissions for CFC-11 are located on the US Potent GHG Tracker website.

Since 1977 five different sampling programs within The Halocarbons and other Atmospheric Trace Species (HATS) group have measured chlorofluorocarbon-11 (CFC-11). These programs include three flask systems and two in situ programs. Flask measurements started in 1977 with six locations and another nine added over the years. Currently, the flask program samples at 15 sites about once a week. CFC-11 mass spectrometer measurements were added to the HATS flask program in 2010 (M3 instrument).

The in situ program began in 1986 (called RITS) with a pair of gas chromatographs located at Mauna Loa, Hawaii and the South Pole observatories. The stations at Barrow, Alaska, American Samoa, and Niwot Ridge, Colorado added instrumentation over the following years. The HATS group developed a four channel gas chromatograph in the late 1990s (called CATS) to upgrade and expand the in situ measurement program. The CATS gas chromatographs are currently deployed at five field sites and make hourly measurements.

A combined dataset has been developed to incorporate the HATS monthly mean measurements made by each program. The combined dataset is calculated by taking weighted averages of co-located measurements from background NOAA/GML air measurement programs (listed below). All programs are on the same NOAA scale (NOAA 2016 scale for CFC-11), and every attempt is made to correct known biases between measurement programs; however, there may be small differences that are not understood and characterized.

When comparing measurements from station to station, be aware that not all locations are composed of the same measurement programs. The hemispheric and global means in the combined dataset are our best measure of long-term trends and are used for international and national assessments for background air measurements. Displayed below are the datasets used to produce the combined CFC-11 dataset as well as several figures. 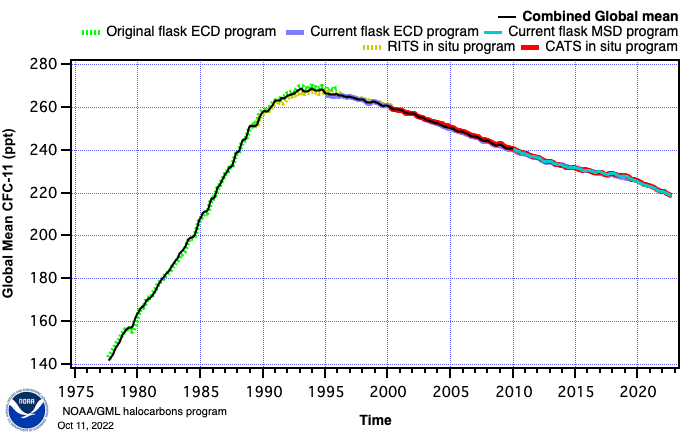 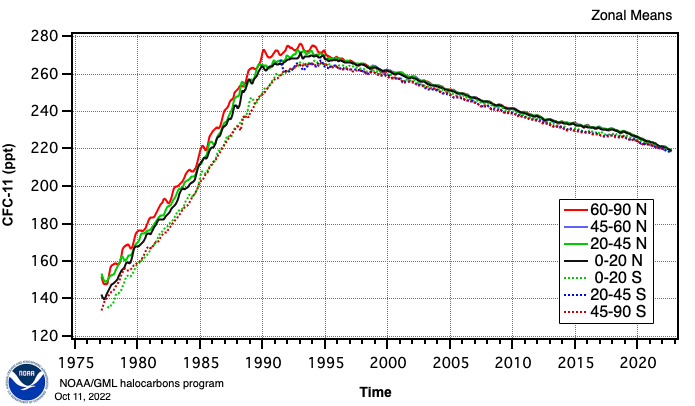 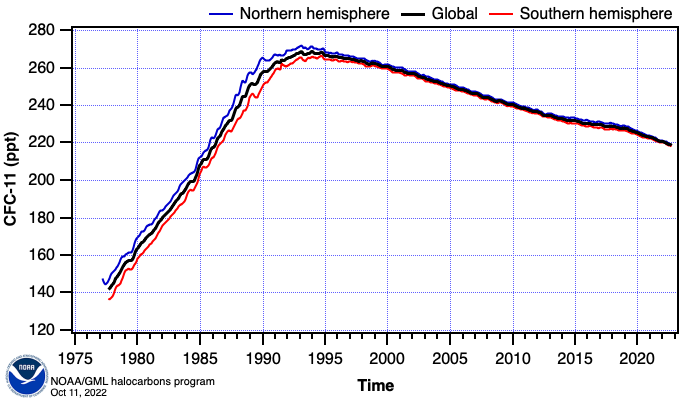 Hemispheric and a global mean are calculated from the zonal averages where sampling locations are weighted by the cosine of their latitude. This combined CFC-11 dataset is used in NOAA's Annual Greenhouse Gas Index (AGGI) and NOAA's Ozone Depleting Gas Index (ODGI). 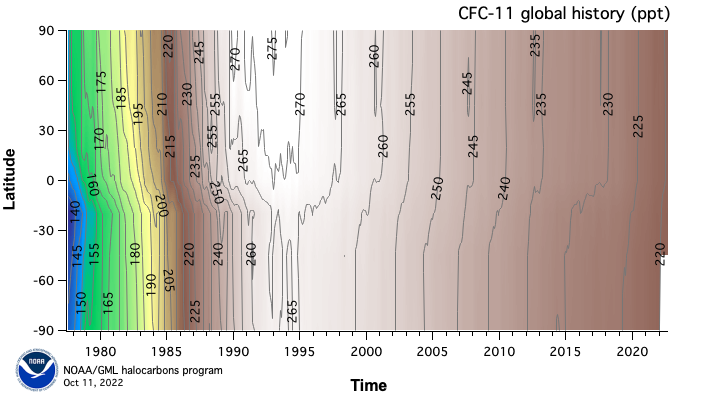 Global history of CFC-11 as a function of latitude (y-axis) and time (x-axis).