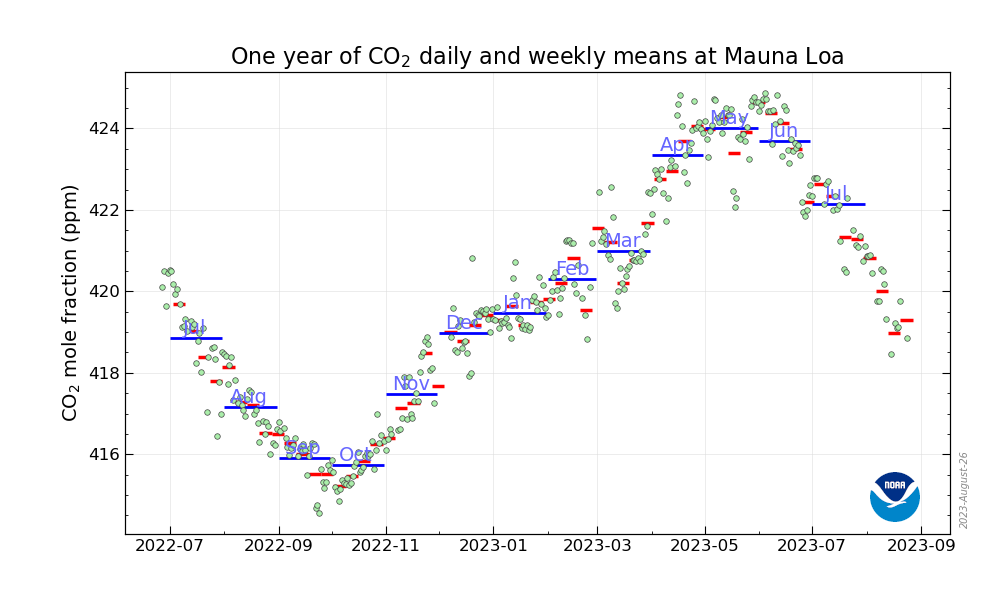 The graph, updated weekly, shows as individual points daily mean CO2 up to and including the week previous to today.

The weekly mean (red bar) is simply the average of all days in the week (Sunday to Saturday) for which a background value could be defined. Note that the “Weekly value from 1 year ago” shown in the box above the graph is for an average of 7 days starting exactly 365 days before the current week, so it may not be a Sunday-Saturday week. The 1 year ago weekly value is not plotted on the graph.

As a visual aid, the blue lines present monthly means of background data as they are presented under Recent Monthly CO2 at Mauna Loa.

The selection process is designed to filter out any influence of nearby emissions, or removals, of CO2 such as caused by the vegetation on the island of Hawaii, and likewise emissions from the volcanic crater of Mauna Loa. We require low variability within each hour and between successive hourly averages, as well as a degree of persistence of the likely valid "background" hours between successive days. Thus, some of the hours that are initially designated as background, may still be flagged as unlikely to represent background conditions as information about the following days becomes available.

For details, see ”How we measure background CO2 levels at Mauna Loa”.

The average standard deviation of day to day variability, calculated as the difference from the appropriate weekly mean, equals 0.38 ppm for the entire record.

These data are still preliminary, pending recalibrations of reference gases and other quality control checks. 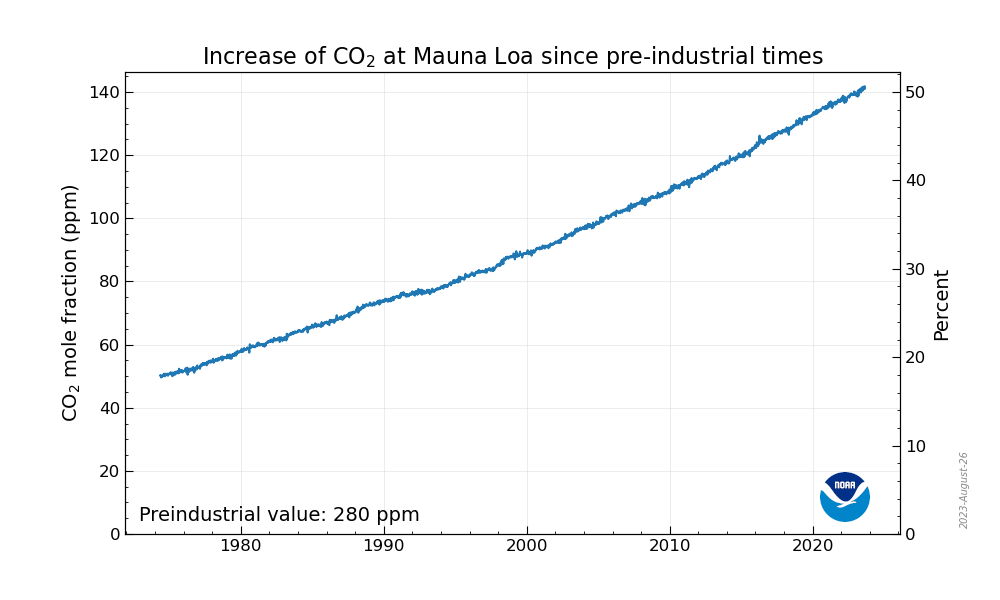 Atmospheric increase of CO2 over 280 ppm in weekly averages of CO2 observed at Mauna Loa.

This figure shows the atmospheric increase of CO2 over 280 ppm in weekly averages of CO2 observed at Mauna Loa. The value of 280 ppm is chosen as representative of pre-industrial air because it is close to the average of CO2 measured and dated with high time resolution between the years 1000 and 1800 in an ice core from Law Dome, Antarctica. [Etheridge et al., 1996]. Although the time resolution of old air locked in ice cores is not enough to preserve seasonal cycles, there is no doubt that the seasonal cycle, which is mostly caused by photosynthesis and respiration of ecosystems on land, was similar to what we observe today. Therefore, for the comparison with pre-industrial times the Mauna Loa weekly data have been first deseasonalized by subtracting the observed average seasonal cycle, and then subtracting 280 ppm. The enhancement of the CO2 mole fraction in the atmosphere over pre-industrial is expressed both as ppm and as a percentage change since the year 1800.